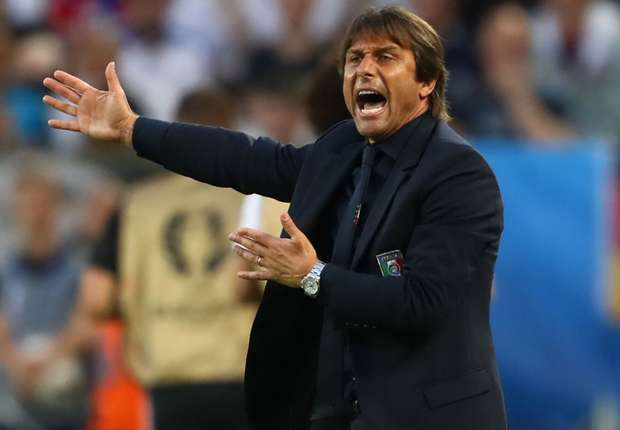 Antonio Conte began his work at Chelsea on Monday with his Euro 2016 commitments concluded as Italy were defeated by Germany in the quarter final.

Fresh from a week-long holiday, the Italian has arrived at Chelsea’s Cobham training ground to meet players and staff and begin the club’s pre-season before meeting the British media in a press conference on Thursday.

Conte will then make his bow in a Chelsea dug out against Rapid Vienna in Austria on Saturday before heading to Velden for a training camp and participation in the International Champions Cup in Los Angeles.

So how will Conte become a Chelsea success? These is the 46-year-old’s five-point plan of priority tasks if he is to keep a demanding owner happy and right Jose Mourinho’s wrongs of last season…

Diego Costa and Cesc Fabregas both cited last year’s pre-season as the beginning of the problems.

The former Premier League champions drew 2-2 at home on the opening day against Swansea City and things then went from bad to worse until Mourinho was ultimately sacked on December 17 with the club were languishing one point above the relegation zone.

Mourinho admitted that “clearly some bodies didn’t react as well as we expected” as he shortened pre-season to three games, while Costa confessed he was “overweight” amid a squad almost entirely underwhelming for the majority of the campaign.

Chelsea will play in six games this summer, with another fixture soon to be announced, as the players seek to learn from the mistakes of last year.

Chelsea are woefully light in the striking department despite the recent signing of Michy Batshuayi from Marseille.

The club decided not to take up the option to sign either Alexandre Pato or Radamel Falcao, while Loic Remy looks likely to leave after being linked with a move to Turkey.

Alvaro Morata and Gonzalo Higuain are two big names being linked with a move as the Blues look to bolster their options.

Chelsea have been acting on Conte’s behalf to sign players since he was formally announced but business has been slow.

The Blues will need to find at least one new centre-back and perhaps look for a midfielder as they chase the signings of Radja Nainggolan, N’Golo Kante and Axel Witsel.

The 25-year-old is already showing signs that he is back to his best having been Belgium’s top performer at Euro 2016 after a decent end of season in the Premier League.

He ended Tottenham’s tilt at the Premier League title with a stunning goal at Stamford Bridge in a 2-2 comeback, while his solo goal against Liverpool will also linger in the memory.

The Belgian will undoubtedly be key if Chelsea harbour any ambitions of silverware next season after scoring four goals in five games at the end of last term – with the first of those goals ending a 356-day goal drought in the league.

Hazard will, however, have to adapt to a new system under Conte but he is a versatile attacker who has shown he can play in numerous positions.

Chelsea last season conceded 21 more goals than when they won the Premier League title in 2014-15 as their defence crumbled time and again.

Terry was mismanaged all season. The captain was rushed back from injury which only led to another, while a contract saga hung heavy over his head throughout.

Branislav Ivanovic noticably lost at least a yard of pace, while John Obi Mikel was required to deputise in defence on multiple occasions for the first time in his career.

As well as the issues posed by older players, Conte has youngsters like Baba Rahman and Matt Miazga who have yet to be given a chance to convince.

It is likely the club will need to sign a top defender with Terry expected to play a lesser role, but he will no doubt show his influence through leadership and experience.

5.BRING BACK THE FIGHTING SPIRIT

Chelsea’s players were criticised repeatedly by fans last season for not showing enough passion as they found themselves slipping towards a relegation battle.

Interim manager Guus Hiddink managed to rebuild the confidence of his players and got the team back in a respectable position but his appointment came too late to secure European football.

“It is difficult to stay motivated when you cannot win a title any more,” Willian said late in the season as the Blues finished in 10th place to cement their place as the worst Premier League title defence.

Conte is here to stay and will not abide faltering efforts. “Eat grass” was his motto at Juventus – if you don’t cover every blade, you’re out. He isn’t afraid of confrontation.

In 2014, with the title already won, Gianluigi Buffon approached him the in the dressing room about the team’s bonus for being Serie A champions. Conte’s response was brutal: “From you, of all people, I would never have expected such a thing … You’re a disappointment, a defeat from the moment you open your mouth. Just like all the rest of these half-wits.”

There is little doubt that the players will need to be fighters next season. If not, they won’t last long at Chelsea.